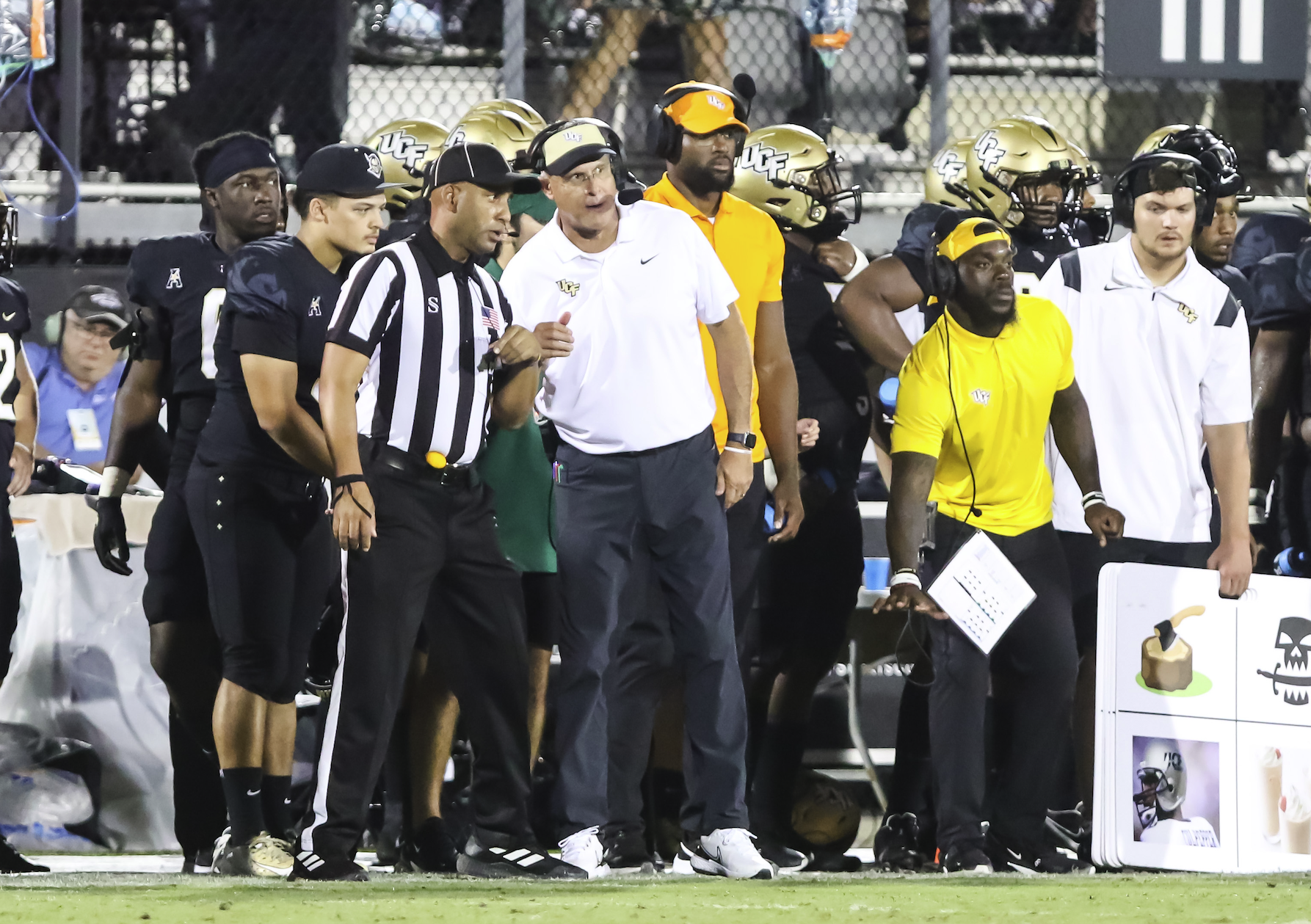 In a January 1979 UCF President Trevor Colbourn announced that he was "going to explore the possibility of developing a football program at UCF" during his inaugural. Colbourn and Athletics Director Jack O'Leary approved a decision to form a football team to begin play in the fall as part of NCAA Division III.

Humble beginnings: In March 1979 prospective players brought their own uniforms to the tryouts and were required to pay $14 per night to stay in the dorms. Without a budget to hire a staff, O'Leary reached out to six UCF graduate students as volunteer assistants. From there, O'Leary was able to lure Don Jonas, a former NFL quarterback, to become UCF's first head football coach on a voluntary basis.

UCF will compete in the American Athletic Conference for one more athletic season, then transition to membership in the Big 12 Conference beginning in 2023-24. The addition of Cincinnati, Houston, UCF, and independent BYU will give the Big 12, 14 members in 2023, with Oklahoma and Texas exiting in 2025.This is the biggest thing to happen to UCF athletics since the “undefeated national championship” of 2017, and it’s probably bigger than that. UCF could be jumping from a $7-8 million annual payout from media and the playoffs to $25-30 million per year.

This article is from our September 2022 issue. It is out now and available for download.

There are whispers in the wind that the fairies are returning to the gardens in late summer which means Fairy Doors are coming back! Check out this charming exhibit running through October 31, 2022. It features twenty, one-of-a-kind, whimsical fairy doors which will inspire your child’s imaginative world of enchanted forests, secret gardens and the magic of fairies. Each door is created by a very special fairy and all you have to do is find these beautiful doors located throughout the 50-acre gardens. A map of the fairy doors and a narrative of each fairy will be available to all guests. This is a fun exhibit for all ages. Gather some friends and/or family to see if you can find all the fairy doors, but remember the doors only open for the fairies. Daytime garden admission: $15 adult, $10 child (ages 4 – 17 years) which includes the Fairy Doors exhibit. Free admission the First Monday of each month. Leu Gardens is located at 1920 North Forest Avenue. Visit leugardens.org or call 407.246.2620 for more information.

8:30 am-10:00 am. Come join us for a free Youth Nature Walk at Mead Botanical Garden! Presented by Calvin Gardner, Orange County Extension Agent, the focus of this event will be on observing natural environments to educate and inspire curiosity in our local plants and animals. Walks will be led by one to two Extension Agents, several Master Gardener volunteers, and at least one parent or legal guardian per party. FREE! Registration required at http://ocextension.eventbrite.com. 407-254-9200.

Movie in the Gardens - Ghostbusters

Enjoy an outdoor movie in Orlando’s beautiful Leu Gardens. The Gardens open at 6:00 p.m. Movie time is at 7:30 p.m. Pack a dinner picnic basket and seating, alcohol is permitted. This movie is rated PG13, children under 13 years of age require accompanying parent or adult guardian, weather permitting. Tickets are only available online. It is best to arrive 30 minutes prior to movie time due to location of the movie area in the gardens. Please bring in your dinner/seating when you enter. Cost: $7 adult, $5 child (4-17 years of age), plus tax and online fees. Tickets available online until we reach capacity.

7:00 – 10 :00 p.m. Are you ready for an incredible fall concert in Orlando’s most beautiful Leu Gardens? Enjoy an amazing evening of jazz, blues and a little bit of everything in between from some of the most popular bands in Central Florida. Pack a dinner picnic of your favorite foods and bring seating, alcohol is permitted.

Join us at Barber Park for special autumn creations to make the most of the fall season for your home, wardrobe and kitchen: delicious and balanced meals, treats, plant-based meals, fresh squeezed juices, farm fresh produce, eggs, seafood straight from the coast. Plus, you will find healing oils, soaps and lotions, pet products, plants, clothing, books and decor. Talented local vendors offering their best wares, food and treats, along with live music and food trucks. Picnic tables provided so you can enjoy all the delicious offerings on site, then load up to take more home. Show off your costumes as you shop and trick or treat around the pond. Children’s Corner and photo ops hosted by Baer Team Realty with complimentary arts and crafts for children. Dress up the children, pets, and family to bring home prizes. Prizes will be given for best team costume, best pet costume, and cutest costume.

10 am – 11:30 am Learn about Florida-Friendly plants and how to choose the plants to match your site conditions to a healthy edible or ornamental landscape. Each participant will receive a copy of the new FFL Plant Selection Guide that shows you sunlight, water, and pH ranges of over 250 plants. This class will be presented by Tia Silvasy, Orange County Florida-Friendly Landscaping™ Extension Agent. $10 fee. Registration required at ocextension.eventbrite.com or call 407-254-9200.

Join us at Edgewood City Hall (405 Bagshaw Way) for our annual Trunk or Treat Event! Dress up your children in their most errie-sistible costumes while visiting decorated cars for fun treats. Free hot dogs and a drink for kids (while supplies last), along with a food & desert truck. It will be fang-tastic!

American Legion Auxiliary Pine Castle Memorial Unit 286 members will be distributing Poppies in honor of Veterans Day. The distribution will take place at two locations on Friday November 11th and Saturday November 12th. The locations will be at Navy Exchange located at 8717 Ave C and at Clemons Produce located at 3325 Curryford Road. Please help honor our Veterans by stopping by and picking up a poppy to wear. The members of Unit 286 are dedicated to the Poppy program and would like to express their sincere appreciation for the men and women who serve in the United States Armed Forces and request that everyone wear a Poppy in recognition of veteran’s service and to say to all Veterans: Thank you for serving this great country. Thank you for protecting us.

Join us at Rio Pinar Country Club to help support the Boone Foundation. To register or for more information visit www.boonefoundation.net.

10 am - 2 pm at First Baptist Church of Pine Castle

Free to attend! We will accept donations of nonperishable food items for our food pantry. Local craft & business vendors, food trucks and fun and games for the whole family!